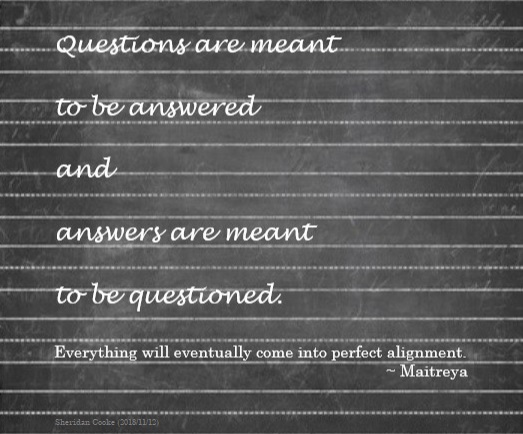 “Clear the slate,” Maitreya recommended, knowing that the young girl was feeling especially vulnerable as of late.

“As if!” the cynic scoffed. “Setting the record straight is more like it.”

“Let’s start over,” the shadow girl said, knowing that her recent integration with the young girl’s energies was a blessing in disguise.

“The truth will set you free,” whispered the wind. “You simply need to reexamine and redefine what you hold as truth.”

“My thoughts precisely,” the woman agreed.

If you started off your day knowing that one of the first channeled blogs you’d be posting would mean exposing a few dark corners of your inner realm, would you hesitate or leap in with both feet?

“I’d simply dip a toe in, just to see what the water felt like,” the fool said. “Maybe you’re meant to show people that being vulnerable is the best thing a person can do, and not the worst.”

“Don’t sound so nonchalant,” the cynic remarked, feeling a pinch of regret for not speaking up sooner.

“It’s affecting everyone, not just me,” the troll said, making his presence known for the first time in a while.

“I wish the sage was still here,” said the young girl.

“Oh, he is,” Maitreya assured her. “But I don’t want to give everything in A Tryst of Faith away.”

“Very well, then. Where were we?” Andromeda asked. “If the slate is clear, then perhaps it’s time to share the conversation that was channeled the other day. Whether people read it or not is irrelevant. What matters is that you honour your commitment to share the High Council’s words, as well as messages from the Archangels, the Elohim, and our realm. Your soul contract lists that as plainly as the nose on your face.”

“I never really liked my nose all that much,” the woman admitted.

“Many people misinterpret you, based on your appearance. It seems to be part and parcel of the human condition, which is unfortunate, being that all of you started off looking very much the same, although the soul’s elevation does determine how well integrated a person will feel during the next incarnation chosen. Every level of ascension requires a renewed commitment to overcome the obstacles that were either avoided or ignored in their entirety. There are multiple distractions in the world that are preventing many people from assisting their souls’ elevation. If a butterfly’s wings can carry it thousands of miles, the repercussions of its journey will affect all who come into contact with the energy trail left in its wake. Those who have already awoken are acting collectively, and many are struggling, just as you have been. Please push past these obstacles as best as you are able. Once the first blog post has been uploaded, the remainder will be much, much easier.”

“I’m ready,” the young girl said, bolstering up her courage. “If I’m a rebel at heart, then I can rebel against darkness. I want to do it for my mum, because I know she still hears me. She proved it the other morning.”

“Who’s in?” the fool asked, quickly vanishing and then instantly reappearing wearing a rather ridiculous looking bathing suit.

“You look like a clown!” the cynic exclaimed, laughing.

“Every court has at least one jester,” the Queen reminded the cynic.

For the first time in a long time, no one said anything and the room was completely silent. A few moments later, all the archetypes and guides who had come forward over the years briefly flashed before the woman’s third eye. “United, we stand,” someone then affirmed, and the young girl held up a single daisy and said, “I have a favour. Can you do it for Grandma, please? None of us would be here if she hadn’t followed Melchizedek and given you a message all those years ago.”

“Yes, I’ll do it for Grandma,” the woman replied, sensing her paternal grandmother’s presence. A few distinctive memories that couldn’t be tied to anyone else she knew drifted into her awareness:  a brief glimpse of a bottle of the “Evening in Paris” perfume she often wore, the Jergens hand lotion that always sat on the counter in her grandparents’ rose coloured bathroom, the special honey cookies she used to bake, but, most of all, a feeling of the intangible yet unmistakable bond they shared, even though their family shattered a few years before the woman’s father died. “Why didn’t anyone tell me everything would fall apart?” she wondered.

“You already know the answer to that question,” Andromeda said, reading the woman’s mind and reminding her that the soul’s wisdom will often elude man’s consciousness until the answers are needed, and not necessarily when they’re wanted.

“Besides, what matters is that everything fell back together,” added the Queen.

“Questions are meant to be answered and answers are meant to be questioned,” Maitreya said. “Everything will eventually come into perfect alignment. Besides, every single person defines ‘truth’ differently, and even if what is held as truth is a lie, many are completely unwilling to release it from their repertoires of acknowledgment, which is as unique as a fingerprint or a single strand of DNA. No one in our realm will ever condemn Lord Sananda—whom many know as Jesus—for all the good that he did in the world.”

“But I’m not a saviour,” the woman retorted.

“Yes, you are,” the shadow girl declared. Pointing to the young girl, she said. “You saved her.”

“That’s where you’re wrong,” the woman replied. “She’s the one who saved me.”